Can you believe it’s December?  What a year it’s been!  I just opened an email from Chris Guillebeau titled “2014 Annual Review” and was inspired to look back at my year (and I’m hoping this blog post will inspire you to look back at yours.)

The idea to turn Brighton West Video into a business helping people with YouTube came to me on a plane to trip home to Wisconsin last December.  I’d caught the entrepreneurial bug listening to the podcast Entrepreneur on Fire and my wife and I were chatting on the plane.  I mentioned that a few people had asked me to help them with their YouTube channels.  And it hit me – if people were asking for my advice – maybe I had valuable knowledge that I could turn into a business.

So I focused on helping people create valuable content on YouTube – starting the year focused on web series creators and mid-year shifting to marketing videos.  Over this year, my business has morphed and I’ve personally gone through a lot of growth.

If you want to dig in, you are free to read this entire post, but I wanted to add a brief summary:

Christmas 2013 at the church where my parents got married – one year ago.

Enrolling in B-School – for those of you that are familiar with Marie Forleo, you probably know her classes aren’t cheap.  I decided to invest $2,000 in learning how to become a successful online business person.  That was a really hard decision – $2k is a lot of money – but typing in those credit card numbers had an amazing effect.  Landmark Education calls it enrolling – because it’s more than just signing up and paying the cash – it’s like throwing your hat over the fence – you are committed to climbing to the other side.

B-School – the classes were great – the homework was great – my classmates were great.  One of the most valuable things I got out of B-School were new relationships – with people that are motivated creators who are struggling with the same things I was (am) struggling with.

SCORE coaching – After a few attempts to sign up for coaching at the PDX SCORE office, I asked the friend that told me about SCORE if I could just latch on to her coach in Vancouver WA.  What a great move!  Mike Pawlowski has been an amazing resource in scoping out my business and keeping me on track.  Thanks Mike!

First Website – In January, I used Elance to hire someone to build my business website.  It was gorgeous and it was a place I could send people.  I bought business cards.  But the site didn’t quite know what it was trying to do.

LA Web Fest – in April, I travelled to Los Angeles to speak on a panel at LA Webfest.  Vancouvria won an Outstanding Writing award, and I met some amazing web series creators.  And I recorded the first mini-interviews for my upcoming YouTube channel.  Thanks Michael!

Creators and Fans mix at VidCon

VidCon – I was back in Los Angeles in June for VidCon.  If you are a YouTuber and you haven’t been to VidCon, you need to check it out.  It’s over 10,000 people conferencing right outside DisneyLand and about 9,500 are twelve years old.  But the other 500 are incredibly valuable contacts – I purchased the Industry Pass and met some people I’d watched many times online.  People like Derral Eves, Gideon Shalwick, Freddie Wong…  And I built up my collection of mini-interviews with some top-notch YouTubers.

Vid Summit – October brought me back to Los Angeles for the first annual Vid Summit.  I upgraded to spend extra time with Darrel Eves and David Walsh – two of the top YouTube marketers. 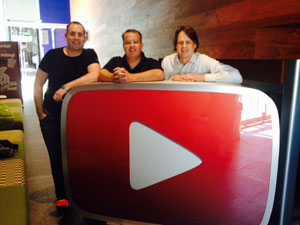 David Walsh, Derral Eves and me at YouTube Spaces LA

Coaching from Darrel Eves and David Walsh- before and after the conference, I’ve gotten real value from these two.  Typing in those credit card numbers was hard, but I’m learning to “go big.”

Newsletter Funnel – I’d known for years that I was supposed to build an email list.  That was driven home in B-School.  But David Walsh really got me moving on this on – setting up the free giveaway and tripwire.  Thanks David!

WDS2014 – Back in Portland I bought tickets (thank you Craigslist) to the World Domination Summit.  This is something I’d heard about the prior year and thought it was a little off the wall.  But in 2015, I’d discovered Chris Gillebeau’s $100 Startup, and learned that not only does Chris live in my neighborhood, and wrote the book in many of the coffee shops where I read it, but he also hosts an amazing annual event in Portland, drawing adventurers and entrepreneurs from around the world.  Once again – great content, even better connections.

Mastermind – I’d heard of Masterminds (thanks John Lee Dumas) and at WDS, I attended a session on joining one.  For the uninitiated, a Mastermind is a group of 3 to 50 people who coach each other and create accountability.  They are wonderful for the small startup.  I joined Chris Franklin and Brent Wallace (both WDSers) and later Alex Broderick-Forster.

Virtual Assistants – A few years ago, after reading the The 4-Hour Workweek

, I decided to hire a VA in India.  My niece can tell you how that went.  One of her first tasks was ordering Christmas presents on amazon.com.  My niece ended up with more nail polish than any teenager should ever have and my credit card bill was a bit larger than expected – but I learned the importance of giving clear directions.  This year I hired four people to work remotely and have had amazing success.

Interview Series – trying to follow in John Lee Dumas’ footsteps, I launched a “video podcast” series of 23 (and counting) interviews with people who are making money using YouTube.

Setting up studio – after climbing over the queen size bed in the spare bedroom to adjust lights or turn on the camera, I transformed my spare bedroom into a studio.

MacBook Pro – this summer, the old white macbook was replaced with a MacBook Pro – and I couldn’t be happier (OK, If I’d bought the even faster one, I’d have more luck with YouTube Live – you were right Gideon Shalwich)

Going part time in my day job – I have a great day job, but it was proving to be impossible to really move my business forward on Saturdays and evenings (I’m most productive in the morning, but my day job starts at 8am, so I couldn’t squeeze in a lot of “me time” before work.)  On September 1, I cut my day job hours from 40 to 24 and added two full days to my Brighton West Video schedule.  And I’m still working on keeping Sunday free from either job. 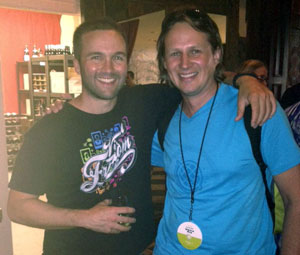 Fiverr – when I first discovered Fiverr, I didn’t understand why anyone would provide services for $5 over the internet.  But after 9 months of buying, I decided to become a seller.  Many of you reading this newsletter have probably found me through Fiverr.  This has been a great exprience.  It’s not much money, but many doors have been openned and the feedback has been rewarding.

B-School – OK, B-School was big.  And I found that I’m not the best online student.  So I still have a few classes to finish.  But Marie does give lifetime access to the classes.
Client Proposals that went nowhere – There were a few – in fact most of the proposals I sent out that didn’t result in work.  I think this was just a lesson to learn, and confirmed that my ideal business is selling knowledge, not time.

Terra, Rob and Kolin – my first few attempts to work with people as “guinea pigs” when building my business.  I can’t say what happened with each one, but I think the level of commitment on both sides was lacking.  If you are looking to go into business – I encourage you to start charging for your services immediately. The other person will more value your services, and you’ll hold yourself to a higher standard because you are getting paid.

Losing Ernest as a Virtual Assistant.  I’m not sure what happened to my favorite VA.  I found Ernest on fiverr.com and we worked together well – but then I stopped getting return emails, and I’m searching for a replacement.  So if you have a VA that you love and they have a few hours per week to spare, please send them my way.

So this ended up being a really long blog post.  But it was great for me to realize how far I’ve come in a year.  How about you?  Are you ready to write a year in review?  What were your top accomplishments and near-misses of 2014?