Below is the gear I recommend for setting up a small DIY home studio, with a teleprompter. A teleprompter will allow you to type out your script, then read it from a piece of glass in front of the camera lens – so it looks like you’re looking directly into your viewers eyes, but you’re really just reading your script. In this blog post, I’m focused on iPhone and Mac products – but it’s possible to do the same thing with Android and PC devices – I’m just not as familiar or qualified to write about that. 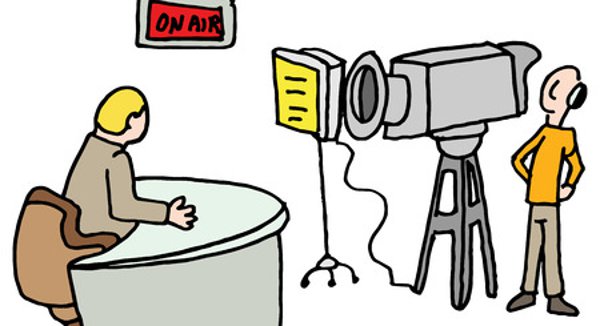 You’ll need a tripod to hold your teleprompter and iPhone. I recommend one of the following tripods: The Amazon Basics 60″ Lightweight Tripod for $20. Or the Dolica 62″ Tripod for $50. Both will work – the Dolica is just a stronger, less plastic, longer lasting tripod. When using a teleprompter and filming youself, you don’t need a “video head.” That just makes for a more expensive tripod.

Teleprompters were once very expensive – then Apple invented the iPad and some smart people realized they could combine the iPad with some glass, metal and plastic and have an affordable teleprompter. The CaddieBuddie Teleprompter is a steal at $160. Note that it doesn’t come with a monitor to project your script – you’ll need a tablet, iPad, etc in addition to the teleprompter. I’ve got a post about using a teleprompter.

The teleprompter I mention above does not come with a computer screen to project your text. You’ll need something like an iPad or Android device to attach to the teleprompter. If your eye sight in good – you can get away with using an iPhone. And you’ll need an app to mirror and scroll your script. Teleprompter Apps are expensive as far as apps go. My current favorite is PromptSmart Pro . For $15, this one will listen to you speak, and adjust the speed accordingly. And if you pay an extra $2 a month, you’ll get some nice features like batch uploading scripts. The downside here is that the developer seems to have stopped updating the app – so I’m guessing it’s going to break when Apple releases a future update. I’ve used two others, and I find Teleprompter+3 at $20 is worth the extra $5 compared to ProPrompter and would be a good backup if PromptSmart stops working. I’m not familiar with the Android options.

Because you’re using a teleprompter, the screen from your iPhone will not be visible. If you already have a Mac laptop, I recommend getting a lightning cable to attach the USB port on your iPhone to your laptop. Then open Quicktime Player, choose File: New Movie Recording and select your iPhone as the source. This will mirror your iPhone screen so that you can see it to set up your shot.

If you don’t own a Mac laptop, I recommend connecting your iPhone to a TV with this adapter and an HDMI cable. Alternately, you could buy a small monitor in place of your TV.

Kingso LED Reading Light – Even if you have light coming from a window, it’s nice to have a small adjustable light to make you look awesome. And this will even work in a dark room (in a pinch.) This is not an item that I own, but it looks to be the best option for a small LED light that you can attach to a teleprompter.

Because your iPhone will be hiding behind the teleprompter, you’ll want an easy way to start and stop the video camera. This CamKix remote should do the trick.

If you’re using a Teleprompter, you are probably inside a studio, where the sound is decent. But if you need to boost your voice, the Movo PM10 Lavalier microphone can clip to your shirt and make you sound great. At $15, it’s a steal. But because you’re using a teleprompter, the cord probably isn’t long enough – so pick up a 6 foot extension cable.

Note that microphones for smartphones are different than other similar looking microphones. So be sure to buy one that says it works with smartphones. The Rode SmartLav+ is the cadillac of Smartphone Lavalier microphones – and will set you back $80.